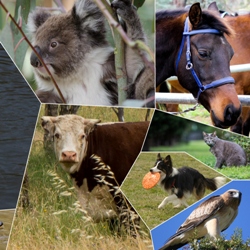 The Animal Welfare and Management Strategy 2017 - 2022 seeks to take a preventative and proactive approach to animal welfare and management. For information please view the strategy (PDF 17.6MB).

Thank you to everyone who provided feedback on the draft Animal Welfare and Management Strategy.

A total of 110 submissions were received with written submissions from the community and key interest groups.

The community response confirmed that responsible pet ownership is an important issue for Canberrans.

Some of the issues raised by members of the public included legislative reform in particular in relation to dangerous dogs and cruelty offenses, greater enforcement of current laws, cat management issues including cat containment areas and roaming cats and greater regulation for the pet grooming industry.

View a summary of the comments received as part of the consultation and the ACT Government responses (PDF 454KB) | Word version (DOC 296KB).

For information on greyhounds in the ACT and the greyhound re-homing process, please view the Greyhound Welfare and Management factsheet (PDF 97KB) Word version (36KB).

The government provides minimum standards for the care and use of animals.

Animal Welfare Act 1992 (the Act) regulates offences related to animals such as animal cruelty and is administered by TCCS. TCCS is the government's lead department for animal welfare in the Territory.

The Act allows the Chief Executive to appoint inspectors for the purposes of enforcing the Act. Officers from within the RSPCA have been appointed as inspectors due to their outstanding knowledge of the types of actions or omissions of actions that constitute an offence under the Act.

The Act has a range of enforcement powers to promote and monitor acceptable standards of care, and protect animals from cruelty or welfare offences.

The Act provides the framework for standards of the care and use of animals that achieves a reasonable balance between the welfare of animals and the interests of persons whose livelihood is dependent on animals. It also allows for the effect of advancements in scientific knowledge about animal biology,
and changes in community expectations about practices involving animals.

A Code of Practice sets the minimum standard acceptable for dealing with, or interacting with, an animal.

View the Animal Welfare Act 1992 and Codes of Practise on the ACT legislation register.

The welfare standards and guidelines for livestock aim to streamline livestock welfare legislation in Australia, ensuring that it is both practical for industry and results in improved welfare outcomes.

Australian producers have always been aware of their responsibilities for livestock welfare, however, increasing awareness among consumers is placing significant pressure on our livestock industries to improve animal welfare. The development of welfare standards and guidelines underpins access to overseas
markets and reinforces Australia's international leadership in livestock welfare. Without such change Australia risks losing consumer confidence and significant national and international markets.

In 2018-19, TCCS was the ACT Government’s lead agency for animal welfare and administered the Animal Welfare Act 1992 (AW Act), which regulates offences such as animal cruelty.

The AW Act has a range of enforcement powers to promote and monitor acceptable standards of care, and protect animals from cruelty or welfare offences.

The Executive Group Manager, City Operations within TCCS was the appointed Animal Welfare Authority for the ACT.

The government continued its service funding agreement with RSPCA ACT to provide animal welfare services including the provision of authorised inspectors under the AW Act.

As at 30 June 2019, 44 employees of the ACT Government, four inspectors from RSPCA, and all sworn ACT Police officers were appointed as inspectors under the AW Act.

The Animal Welfare Advisory Committee (AWAC) is a statutory committee established under section 109 of the AW Act.

The AWAC met on 9 occasions in 2018-19 and undertook the following activities:

Permits, investigations and prosecutions In 2018-19, the Animal Welfare Authority issued:

During 2018-19, the RSPCA received 1,053 cases complaints/referrals in relation to animal welfare. Inspectors investigated 1024 of these matters, which resulted in prosecution of 7 individuals. One case was finalised this financial year with the offender receiving an 18 month Good Conduct Order, an 18 month animal ban and a $50 fine.
As at 1 July 2019, there were three cases before the courts.

Humane preparation of crustaceans for consumption at home

Legislation to outlaw puppy and kitten farms in the ACT aims to prevent breeders from intensively breeding female cats and dogs for the local pet market.